Although this is already a well debated subject and quite out of date in the high-speed world of media and scoops hunt, I still want to write some lines about the Mumbai attacks and the social media (1). I’ve been sick with the side effects of a wisdom tooth removal and therefore my delay in updating my blog. Still sick, but recovering 😉

The Mumbai attacks in India were highly covered all over the World. In every television channel, radio station, newspaper and magazine we followed the deadly terroristsâ€™ attacks. And this was a reality in the traditional and in the new media. However, what was really interesting to see was the use of twitter, flickr, Wikipedia, blogs, YouTube and even google maps to cover the unfortunate terrorist event. Local bloggers and the so called citizen journalists used all these social media to give information, updated by the minute.

The media used them as sources for broadcasting their own news and also used some of these tools. We could find fresh news every few second on Twitter, on Mumbai, Bombay, and #Mumbai.

The Wikipedia page on the attack started at 18:20, 26 November 2008 by a user named Kensplanet. The page grew to nearly 5,000 words in 6 sections and was edited over 900 times in 21 hoursâ€¦. And this is clear example of collaborative work. As Larry followed, during this time, 149 editors were anonymous (IP address only), 199 people made only one, and 93 authors could not be identified. Two contributors had made over 50 edits. Kensplanet, who started the article, had made 57.

Local bloggers covered every minute of the event at Metblogs Mumbai and GroundReport.

And even a Google Map was developed, tracking the points of the attack: 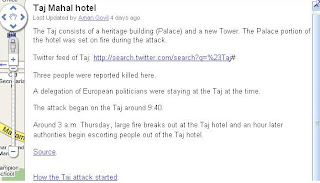 Therefore, this case was interesting to think about the repercussions of this new social media. I would emphasize the participation issue and the deconstruction of traditional media structures and domination. In fact, the gate-keeping media paradigm offers a reduced and manipulated vision of reality. And donâ€™t tell me the model is obsolete: itâ€™s still a reality. Everything is filtered and based in a solid system of influences, politics, hidden supports and manipulations. Iâ€™m talking about the scoop, the news that sell, the news that are useful for the large media corporations, and so on. And this is easily proved: for instance, check how many times developing countries (specially â€œthird world countriesâ€â€¦I know this expression was eliminated since the non-aligned movement creation and itâ€™s not used anymore, but itâ€™s still helpful to portray a set of countries) are news and you will find that their are only noticed by the media, when they suffer a natural catastrophe, war, famine, etc.

The blind fight for audiences and the market driven demands leads to a powerful and controlling censorship. These hidden mechanisms of economic pressure make the media a powerful tool for perpetuating the symbolic order, as Pierre Bourdieu underlines in his delicious â€œSur la TÃ©lÃ©visionâ€ (you can read this amazing book or check his video here). Plus, the journalism world is narcissistic and falsely auto-critical, as Bourdieu remarkably notes. Of course heâ€™s intention is not to â€œdestroyâ€ journalists, but to make them think about the â€œmedia gameâ€, clearly embedded in their practice and that sometimes is even unconscious. Using the television example and his studies, Bourdieu emphasizes that â€œThe television guided by the audiencesâ€™ index contributes to exercise on the supposedly free and educated consumer the market pressures, which have nothing to do with a democratic expression of a rational and well-informed collective opinion, of a public reason, as many cynic demagogues want to make believe.â€

Therefore, social media have the potentiality to change this set of things, to create a rupture in the conservation of these established values, as itâ€™s based on a free and easy world-wide participation (as long youâ€™re in the Web of course, you want to participate and not considering the growing digital divide), interaction (real multi-directional one) and community driven. Plus, they have no editorial chains or censorship. In fact, a series of â€œindependent mediaâ€ sites are emerging all over the Web. Global Voices, Cover it Live and Mahalo are noteworthy examples.

(1) Some quick notes about social media:

Ben Parr defines in his blog that â€œSocial Media is the use of electronic and Internet tools for the purpose of sharing and discussing information and experiences with other human beings in more efficient waysâ€. This definition is quoted by Wikipedia, but raised some discussion, as social media is perceived as much more than electronic and internet tools. Itâ€™s a new media available to anyone on the Web: anyone can publish, share or access information (in a relatively cheap way). And this is revolutionary! But thatâ€™s not only that: social media allows creating and sharing meanings, relationships, communities and networks. As JD Lasica describes: social media is the term used to define the creation of personal content/medium and share it in the public sphere. Social media is intimately related to the Web 2.0 (Sir Tim Berner’s Lee questions the expression, as interaction, interactivity and many of the technological components of Web 2.0 have been a reality since the Web early days. Check also Tim Oâ€™Reillyâ€™s article on this). Others jargons emerged with social media, as citizen’s media, independent media, participatory media and new media. Are they all meaningful? Aren’t they describing the same reality? Or are they defining different dimensions?

One thought on “Mumbai attacks and Social Media”