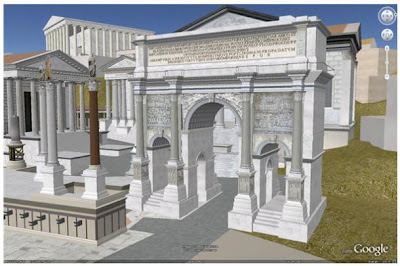 After a post about maps, this is an interesting follow-up note: Google Earth launched yesterday â€œAncient Rome 3Dâ€. This is a joint project of Google and the University of Virginia’s Institute for Advanced Technology in the Humanities (IATH). Itâ€™s also the first time Google Earth includes an ancient city.

For all of us enthusiasts of Ancient Roman history, this is an amazing and delicious tool. The model shows the city (â€œRome Rebornâ€) as it existed in 320 AD, recreating detailed models of more than 6,700 buildings and monuments. Some, like the Coliseum, also feature extremely detailed interiors. The images are completed with historical information in a new layer.

As this was developed, aiming the creation of an attractive educative tool, Google announced a curriculum competition in conjunction with the release of this new layer. Six K-12 educators who create the most interesting curricula based around the Ancient Rome 3D layer will receive new Mac laptops, classroom projectors, and a digital camera. Good luck 😉