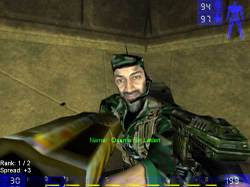 The facts (Wired):
The U.S. intelligence community is working to develop software that will detect violent extremists infiltrating World of Warcraft and other massive multiplayer games, as well as in Second Life, according to a data-mining report from the Director of National Intelligence.
The Reynard project will begin by profiling online gaming behaviour, and then potentially move on to its ultimate goal of â€œautomatically detecting suspicious behaviour and actions in the virtual world.â€
The cultural and behavioural norms of virtual worlds and gaming are generally unstudied. Therefore, Reynard will seek to identify the emerging social, behavioural and cultural norms in virtual worlds and gaming environments. The project would then apply the lessons learned to determine the feasibility of automatically detecting suspicious behaviour and actions in the virtual world.

If it shows early promise, this small seedling effort may increase its scope to a full project.

Reynard will conduct unclassified research in a public virtual world environment. The research will use publicly available data and will begin with observational studies to establish baseline normative behaviours.
The reactions:
Some experts supported the initiative. Andrew Cochran from the Antiterrorist Foundation says this represents a positive evolution, as they already tried to detect the presence of Jihads in the WWW. Mitch Wagner, from the Informationweek, has similar ideas.
However, other specialists show their concern. Juan Coles emphasizes huge privacy risks and talks about the unconstitutionality of Reynard. Nevertheless, Benjamin Duranske, from the site Virtually Blind, explains that â€œThis is simply not what everyone is making it out to be. The government is not investigating terrorists in World of Warcraft. They are not getting chat logs from providers. They are not secretly monitoring conversations. Theyâ€™re just using cheap public data to see if they can spot patterns.â€
Although I couldnâ€™t find significant research to support my perception on users, all people I know living in these other dimensions create new personas for these games/parallel worlds. Therefore, players/avatars seem, in the end, to be only fiction charactersâ€¦will these characters gain real life?
Nonetheless, the idea that virtual worlds are privileged field for growing criminals, terrorist agencies and that simultaneously there is a mandatory need of controlling the unknown are not new. Are we moving rapidly to an Orwellian World? Is privacy at risk? Well, even if they are only using public data, we never really know how further they can goâ€¦and who is going to surveill them? Will the future be a world where we all surveill each other?
As usual I only have questionsâ€¦.

One thought on “Virtual Worlds under Surveillance: The Swindler Fox (?)”