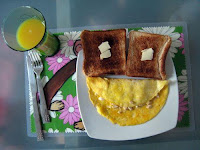 El Pais has an interesting interview today with Adam Seifer, co-founder of Fotolog. Adam Seifer takes a daily picture of his breakfast, lunch and dinner and publishes it on his Fotolog. This may sound absurd, but, 25.000 people see his blog per month, just to check what he is eating. However, â€œIs not about knowing what I eat, itâ€™s about showing a little trace of my worldâ€, says Adam to explain the philosophy of Fotolog, a blog composed by pictures.

Adam Seifer defends the simplicity of this network, where users communicate through pictures, towards the sophistication of other Internet social networks as Facebook or MySpace. In fact, Fotolog has more than 15 million users. This language made of images is becoming famous all over the world, but especially in the Spanish speaking countries, representing 70% of the community. First Chile, followed by Argentina and Spain. But Fotolog is more powerful than we would guess. The Chilean government solved a studentâ€™s strike and manifestation, one year ago, through a dialogue that begun in fotologs created by different university groups to show that they werenâ€™t destroying classes and to emphasize their reinvindications. The government used their comments on fotologs to deal and to end the conflict.

Like other social networks sites, Fotolog rise through â€œmouth to mouthâ€ advertisement, being developed by the so called viral effect, a potentiality of the web (although itâ€™s not easy to create a viral effect).

For Seifer, Fotolog is competing with giants as Facebook and MySpace, because its simple, directed to the users needs and requests. Facebook and MySpace are creating confusion in users, as they are incorporating too many applications. According to him, the future belongs to specialization, networks that can be centred in concrete and coherent things.