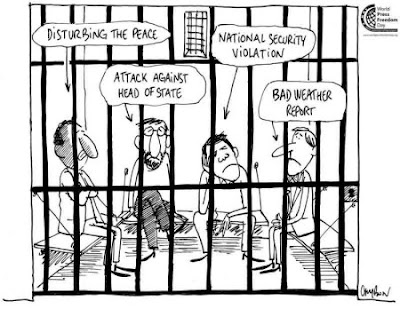 The Pakistani government decided to block, until further notice, the Internet access to YouTube, since Sunday, 24th of February. Authorities have instructed Internet service providers to close this access, because itâ€™s spreading blasphemy and represents a serious menace to Islam. Some sources state that this interdiction was related to the broadcasting of the controversial Mohamed caricatures published by Danish newspapers. Similar actions were taken in other countries like Turkey, Thailand and Moroccoâ€™s (http://www.lemonde.fr/asie-pacifique/article/2008/02/24/le-pakistan-bloque-ses-acces-a-youtube-a-cause-de-videos-blasphematoires_1015161_3216.html#ens_id=1015172).

Freedom is one of our most important treasures, even if it brings great responsibilities with it. Internet utopians saw the Internet as a freedom tool and although, itâ€™s in fact, potential in this sense, governments/authorities have found ways to control it. Nevertheless, Internet is undoubtedly a struggle medium, used by many all over the world to resist and to mobilize. Iâ€™m not saying that Internet only brings advantages and the achievement of golden dreams; itâ€™s a tool, a social-technical product, a human invention that can be used for both good and ill. e-censorship is the new evil and its becoming powerful. I discussed this recent case with one of my Pakistani friendâ€™s and he was saying that we canâ€™t understand their cultural heritage and their ideas. So this, brings contentious thoughts to me in different ways, as sociologist, a type of social-cultural translator of Humanityâ€¦Can we accept different cultures? Can we criticize their rules, actions and beliefs? Can we take our â€œpersonal eyesâ€ and see them differently? as a personâ€¦How can we accept this in the XXI century? How can people not be free to see what they want to see? To search what they want to search? To decide by themselves? How can these repressive societies coexist with us? How can we cope with censorship in any form? And as a thinkerâ€¦what is freedom? Are we all really free? As Goethe once said â€œNone are so hopelessly enslaved as those who falsely believe they are free.â€ The human duality is everywhere, especially in our perceptions, thoughts and feelings.