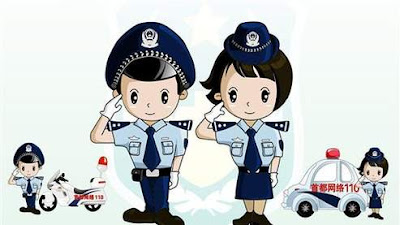 Jingjing and Chacha, the two Â« cyber-police officers Â» placed in certain Chinese sites. Source: AP
The “Press Freedom Round-up 2007” of Reporters without Borders introduces for the first time an online freedom of speech analysis. Therefore, the report shows that 2676 sites were closed or suspended, 37 bloggers were arrested and 21 physically attacked in 2007. China is in the top of the cyber-repression ranking. In fact, 50 of the 65 cyber-dissidents in prison for speaking out on the Internet are imprisoned in China.

What is interesting to notice is that 2.500 sites were closed before and through the 17th Congress of the Chinese Communist Party. One â€œblack-outâ€ that, according to Le Figaro, is probable to be repeated with the Beijing Olympic Games this year. Syria also blocked access to more than 100 sites and online services at the end of 2007, including the social networking site Facebook, Hotmail and the telephone service Skype. Government justifies these actions stating that these sites were being infiltrated by the Israeli secret police.

The last known incident is related with Ahmad Fouad al-Farhan, who denounced in his famous blog (http://www.alfarhan.org/) Saudi Arabia leadersâ€™ corruption and the inhuman politics prisonersâ€™ treatment. He was arrested on the 10th of December and heâ€™s situation is still a secret. El Pais refers that his blog was the most popular Saudi Arabia blog.

Several governments apply different techniques to pursuit with this cyber-repression, closing blogs, sites and arresting people. However, subtler techniques are used in addition, for instance, blocking access to popular blogs or sites for two days and then re-establish the access. Their purpose is to ruin their credibility. In effect, blocking 2.0 sites is a new goal for many countries. The other trend is to turn the Internet into an Intranet, namely a network limited to traffic inside the country between people authorised to participate.
The future sometimes seems really scaryâ€¦
Check RWB â€“ Annual Report – http://www.rsf.org/article.php3?id_article=24909
â€œVoyage au couer de la censureâ€ – http://www.rsf.org/IMG/pdf/Voyage_au_coeur_de_la_censure_FR.pdf
Le Figaro – http://www.lefigaro.fr/hightech/2008/01/02/01007-20080102ARTFIG00312-les-nouvelles-trouvailles-de-la-cyber-censure.php
El Pais –http://www.elpais.com/articulo/sociedad/Detenido/autor/blog/popular/Arabia/Saudi/elpepusoc/20080108elpepisoc_10/Tes