Itâ€™s been crazy and chaotic, so I haven’t updated my blog in a while =( And thereâ€™s sooo many things I would love to write about; from the newspapers crisis to Obamaâ€™s intensive use of ICT and social networks during his campaign and whatâ€™s happening nowâ€¦but, the day only has 24 hours, so itâ€™s been impossible.

Anyway, a quick note about Ada Lovelace Day. Iâ€™m answering to a delicious pledge by Suw Charman-Anderson, asking bloggers to write about women in technology, as a tribute to Ada Lovelace.

Ada (1815-1852) was the first (known) programmer. She wrote a description of a mechanical general-purpose computer by Charles Babbage.

So, here is my contribution:

Iâ€™m not blogging specifically about computer scientists or other core professionals in Tech., but I thought it was a great opportunity to write about social scientists devoted to the study of technology. It’s time to recognize them as well!

So, I’m writing about Helena Monteiro. I could blog about an interesting and remarkable group of Portuguese sociologists that have been developing the sociology of technology in Portugal, as LuÃ­sa Oliveira, Margarida Fontes, among others. But, I chose Helena for four simple reasons:

1.Sheâ€™s a fabulous example of how reality is multidisciplinary, as she comes from Maths (applied mathematics, as algebra, etc), but sheâ€™s now working at the Centre for Public administration & Policies and lecturing at the Institute of Social and Political Sciences, my home =);

2.She worked in the Tech field for years, so she has that impressive know-how and a clear vision of how things really work (in a real pragmatic sense);

3.She always acknowledged the importance of the study of the social impact of technology and how it is crucial to inform and develop technology;

4.Sheâ€™s a pioneer, not only in the study, but also in the development of the e-health system in Portugal. She doesnâ€™t reduce her work only to the academia (and you know what I mean when I say this: publications are not enough!), she makes things happen, pushing for better public policies and commitments from all the community (including industry). She definitely works for a better Portuguese electronic health system and for that she deserves a huge mention.

Therefore, sheâ€™s a fantastic role model. Plus, I have the pleasure to be close to her, so I can also underline how an amazing woman and human being she is.

Here is my tribute to Ada, to Helena, to all amazing women in technology and in society, 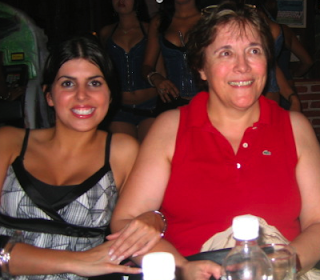 Me and Helena in Santo Domingo, Dominic Republic: Sociological analysis of a men’s bar =)

4 thoughts on “Ada Lovelace Day: A tribute to Portuguese Women in Technology”