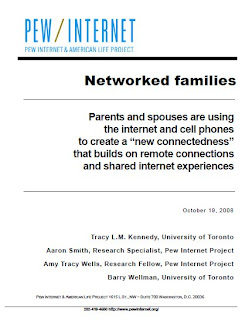 A quick note to say that the new Pew Internet & American Life Project report titled â€œNetworked Familiesâ€ was published today. The study is based on a phone survey applied between Dec. 13, 2007, and Jan. 13, 2008 to an U.S.A. sample of 2, 252 adults, aged 18 and older. Findings show that the internet and mobile phones are central part of the American family daily life. Moreover, the traditional nuclear family is the household type with the highest rate of technology usage and ownership. And this is a really surprising outcome: Internet use and ownership is higher in married couples with minor children than in singles, single-person households and married couples without children. Not so yuppie activity after all!!!

But, how is this affecting the family unit? Even if some authors, especially from a dystopian perspective, demonstrated concerns about the ability of technology to drive families apart and to isolate them, the Pew survey supports opposite ideas. Families use a diversity of communication media to stay connected during the day: Internet, mobile phones, and landline phones. Family members call, talk on IM/IRC, social network sites and email each other during the day. Mobile phones are used particularly by family members to stay regularly in touch and to coordinate the family agenda. But wait, thereâ€™s more: most families are together at night and many members of married with children households view/share moments and experiences on the Internet â€“ the â€œlook at thisâ€ phenomenon.

In one hand, those with the most technology are more likely to share moments with family members while they are online and to exchange some kinds of family communications. In other hand, they are more likely to live in dual-income households and also more likely to report that they are working longer hours, in part because of the Internet. Those with multiple communication devices are somewhat less likely to eat dinner with other household members and somewhat less likely to report high levels of satisfaction with their family and leisure time than are families with lower levels of technology ownership.

However, for about half of the respondents, the new media have an important role in increasing family communication, while about half havenâ€™t perceived much difference. Only a small percentage thinks that the internet and mobile phones have truly decreased family contact. Few household members feel that the internet separates them. Many state that the internet, like the television, brings people together within households.

â€œTheir (families) heavy home internet use suggests that many households are hubs of personal communication networks, as people log on individually to email, IM, post on social networking sites and chat. They are both together with their families and connecting outward to friends and relatives elsewhere. They are neither isolated individuals nor Dick and Janeâ€™s traditional family.â€ Therefore, American households are active spaces of interaction between individual activity and family togetherness. I definitely would like to see data from different countries.